Welcome to Kris and Kritters

Kris and Kritters: A Love Story 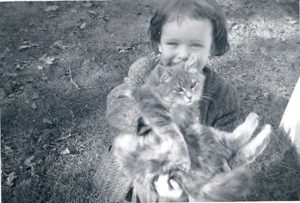 There has been one constant in my life: 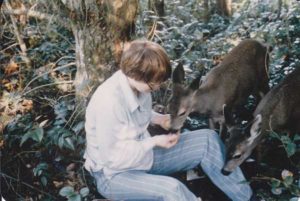 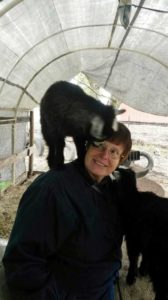 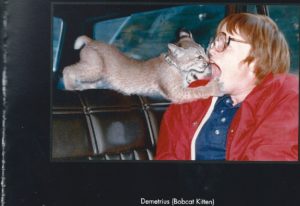 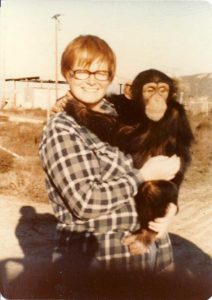 Mom told me she knew something was up early on:

“Birds and butterflies landed on you. It was like something out of Disney.” 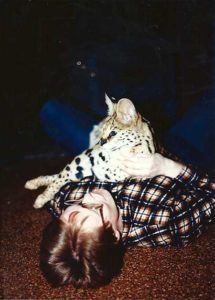 I love animals. And they know it.

I cherish them, treasure them, respect them, and observe them. They sense the affection I have for them.

Animals have finely-tuned “fight-or-flight” sensors. And because I have never been a predator, mindset-wise, animals of all kinds surmise I’m safe—just another fellow sojourner sharing their space, looking to get by and get along.

While most young kids (and too many older ones, and some adults, too) are “grabby”—wanting to obtain and control the critters they’re attracted to—I’ve always been patient, kind, inviting and quietly persistent. I wanted them to want to come to me: I didn’t demand it, or the return of their affection. Just hanging with them was thrilling enough for me!

You can see in the first image above that, although there’s a captivating cat in my arms, she senses no attempt to control her. Why? Because I had let her come to me, and because I was holding her comfortably and lovingly in such an open, respectful way that she knew she could get down whenever she wanted. I was enamored of her mere presence, so she felt safe in my arms.

But even had I lifted her inexpertly, she would have known that I meant her no harm. She would have been patient with me because she could feel my love for her. Getting to know her wasn’t about me; it was about her: what she might be thinking, how she was feeling during the exchange, and whether or not I was a good fit (in her opinion).

From an early age I read voraciously about animals. By the time I was a young adult, I had amassed an animal library with more than 600 books.  It finally occurred to me that every new animal book I got contained information I already knew…so that’s when I decided I had a pretty good handle on my favorite topic.

But it’s all lodged inside me! I’ve been happy to share it one-to-one with friends, family, and business associates whenever an animal topic comes up, but except for a book of pros-etry (prose and poems) about a few of my memorable animal encounters and the challenges facing animals in today’s rapacious, environmentally-unsound world, and a book I wrote about what it’s like to own (and be owned by!) an African serval cat for seventeen years, everything else has remained trapped inside my brain—a brain that is approaching seventy years of age at what appears to be warp factor seven—so I agree that it’s time to start putting it all into a blog.

It was my best friend, Lisa Twining Taylor, who suggested that I start blogging about my animal encounters, insights and mindset. And as soon as she suggested it, I thought, “Now, why didn’t I think of that?  DUH!!!”

I guess part of the reason is because I’ve been so focused on enjoying the animals I share my life with right now—six small breed goats and two cats, whose antics I’ve shared with neighbors, friends and loved ones who visit me—that it never crossed my mind that you and other people you know might want to vicariously tag along as I reminisce and remember the literally hundreds of encounters I’ve had with the animal kingdom, and the insights I’ve gleaned as a result of growing close to so many of them.

So that’s what this new blog is about. I hope you’ll pass the website URL along to the animal lovers in your life if you enjoy what follows as much as I will enjoy bringing it to you—and as much as I enjoyed (in most cases, with a few rare exceptions!) experiencing these adventures as they happened.

The term anima, remember, is Latin; it means soul. Any being with a soul and sentience is a “who” to me. I don’t separate their basic desires and needs from my own, so I don’t choose terms that presume or mandate a purely-subjective separation between human beings and other sentient beings.