All is forgiven NOW, the day after I managed to sling at least a quart of cold vegetable soup  into the face and across the neck and withers of my magnificent Maggie.

I really should have taken pictures of the aftermath of my wayward pitch, but I was in such a hurry to make amends that I didn’t think to document Maggie’s unexpected (and decidedly unwelcome) “bath”…

One second I was lifting the pot of soup over the fence, intent on dumping it on the ground for the excited chickens ahead of the arrival of my equally-excited six-goat herd. (My goats have an ear cocked at all times for opportunities to partake of whatever the chickens are getting if it suits them–and vice versa.) The next, I was watching, horrified, as my lead goat,  Maggie (pictured here), shook herself as one afflicted with epilepsy, abjectly appalled by the liquid shower of vittles that had descended on her from above. 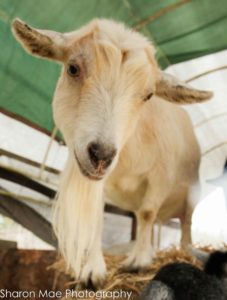 I was sooooo sorry, but I was laughing, too (just couldn’t help it!) as she blinked, wandered and snorted, and as the liquid from the soup dripped slowly exactly down the middle of her forehead, face and nose, and then dropped to the ground in a little rivulet…

I did apologize (of course, laughing as I did so) and went into the house to soak a towel in warm water so I could clean her off. (I didn’t want flies and bees deciding she was lunch suddenly because she smelled and looked like Campbell’s-on-the-hoof.)

Well, long story short…goats hate water… so when I went out to “rescue” her from the mishap I’d caused, she probably thought (I am a goat whisperer, I am!!!), “Apparently trying to drown me with stinky, sticky soup didn’t work, so now she’s coming out here to throw a wet towel around my face and smother me to death.”

I followed her around and around the chicken pen half a dozen times, laughing, crooning, begging, cajoling, saying, “Maggie, I want to help you!” while she was thinking, “I can do without your brand of help, thank you very much!”

I thought about grabbing her goatie  to try to arrest her movement around the enclosure but I knew that doing so would ruin her trust in me forever, so I just continued to pursue her as I talked to/begged her to give me a chance to help her and redeem myself.

(“You’re redeemed, you’re redeemed, apology accepted, just go away. I don’t want a soggy wet towel on my body, I don’t care how benevolent a gesture it is… Go throw soup and wet towels at somebody else–anybody else, please!”)

I finally, finally got close enough to her to put my arms around her chest and stop her.

Then I scratched her to let her know I wasn’t going to hurt her and that there would be no more “friendly fire”.

Then I straddled her and wedged her between my knees (a human livestock squeeze cage) and put the warm, wet towel over her face and washed it, then her neck, then her withers. By this time, she was really, really finished with my ministrations and she bolted forward, carrying me with her until I lost my balance, at which time I ended up on soft, soft ground without a scratch.  (I went down on a solid, foot-deep layer of now very dry goat shed muck–perfect placement to prevent injury… and not a bad commentary on what Maggie probably thought of me at that very moment, too.)

Anyway, today she looks fine (cleaner than usual) and there are no bees or flies following her, so I accomplished what I set out to do.

And we’re living happily ever after.