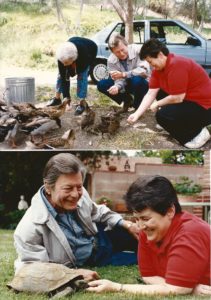 Lower image: De and Sue with Myrtle the Turtle in the Kelley's back yard later the same day

(Excerpt from DeForest Kelley Up Close and Personal, A Harvest of Memories from the Fan Who Knew Him Best)

[After the trip to Shambala to meet my serval son Deaken] De said he’d like us to meet "Myrtle the Turtle", the Kelley's octogenarian desert tortoise, when we got back to their house. Sue and I were tickled pink to be invited to do that.

As we got out of the car at their home De—behaving like a gentleman, I thought (at first!!!)—picked up my jacket and Sue’s purse, hidden within the jacket—from the back seat. Sue headed to the rear seat to fetch her purse. No purse. I opened my mouth to reassure Sue but De gave me a look that could kill which indicated, “Keep your mouth shut.” I hated to do that, knowing what a trauma it is for a lady to lose her purse, but complied. Sue looked on the back seat, then on the floorboards—I was agonizing for her—while De looked on, oh so sympathetically. Sue began to get a little nervous, then stepped backward and noticed that De had my jacket in his hand. She regarded his face for a moment; he was innocent as a lamb, and concerned for her loss. Finally, Sue looked at me. I wasn’t concealing the joke very well, I’m afraid, so she figured it out and grabbed at De’s handful of goods, saying, “You tacky actor!” The gig was up, he was busted but delighted that he had pulled one over on Sue, too.

We went inside the house and then out to the back yard. De found Myrtle in the shrubbery and carried her back to a spot on the lawn; Carolyn arrived with an already-prepared “Waldorf” for Myrtle. Sue and I got on the ground to meet Myrtle face to face and to watch her eat. De decided to join us on the ground, so I quickly grabbed my camera and took some shots of Myrtle, Sue and De. When Sue saw what I was doing, she muttered, “I hate having my picture taken.” De dead- panned, “So do I.” I laughed and got Sue’s reaction shot; it became one of her favorites.

Carolyn gave us a tour of the house and then Sue and I took turns having our pictures taken with De and Carolyn. Sue wasn’t certain how to operate my camera, so I gave her a little instruction while tucked arm-in-arm with De.

I held up a forefinger vertically and told Sue, “Just focus on my finger. When it looks like a clear shot, we’ll be clear, too.”

She focused and then said, “I think I’m ready.”

Then I said, “Oh, what am I saying?! Don’t focus on this (my finger), focus on this!”—and I pointed to De! De grinned at me with such love and pleasure that Sue said, “I snapped the shot. I wasn’t going to lose that look on his face!” The photo turned out beautifully. 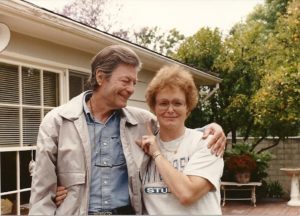 De then said he wanted to pick a few lemons from their lemon tree for us, so he proceeded to do that. He picked an entire large grocery sack full and then said he’d carry it to the car for us. Good thing. It could have given Sue a hernia. It weighed in at nearly twice Deaken’s weight! 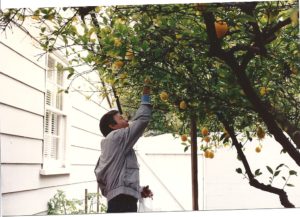 Carolyn was radiant at visit’s end. She had been the one drooled over by Deaken that day and I’m not sure I ever saw her as overjoyed again in all the years I knew her after that—except when she was with Deaken on a few more occasions.

“As an Amazon Associate I earn from qualifying purchases.”