Fawn in the Canal & Gabriel Raccoon 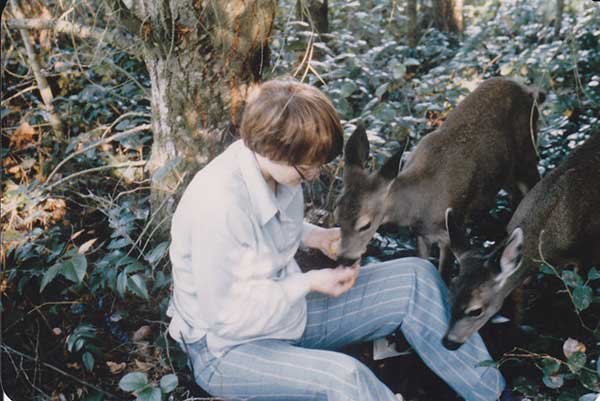 Just a heads up: Both of these stories end sadly because of teenage boys with grownup toys...but they're worth telling anyway.

Fawn in the Canal

Huge, racing irrigation canals crisscross the arid half of Washington State. These canals, at least twenty feet deep and sixty feet wide, direct billions of gallons of water every millisecond from wetter regions to drier regions to provide irrigation waters to arid eastern Washington. In Cle Elum, one of these irrigation canals existed less than a mile from where our home was situated. Part of the canal dove underground at multiple points—one near our place—to emerge a while later farther down the line.

One day a neighbor brought me a young, spotted fawn whose tiny hooves had been reduced to bloody stumps. He had somehow managed to pull her out of the canal after she had been swept what must have been miles along its cement-lined banks, trying to claw her way out of the rushing torrent.

The fawn was exhausted and shaking but probably too well-spent to show any fear of the humans she found herself surrounded by.  The gentleman told me, “I don’t know if she’ll live, but I know you’re the best person I know of to give her the best chance. So here you go.”  He handed her to me, wrapped in a blanket.

I took “Tammy” (named after my cousin, who was visiting at the time) indoors and began the process of drying and warming her. I bought a human-size baby bottle and started feeding her milk replacer. I cared for what remained of her bloodied hoofs. It didn’t take Tammy long to realize that I was on her side. She flourished, grew and began to take “field trips” with me as her hooves grew back and became less painful to walk on.

Tammy was a precious, precious girl… one of the loves of my life. When she was old enough to be released, I just let her wander off, return, and wander off again, figuring that at some point the call of the wild would cause her to find a young male deer or a local herd (perhaps her own) who would take her in. When she was what I’ll call a teenager—her spots had disappeared—she left and never came back.

I was horrified to learn, decades later via a confession told to my sister, that one of the teen-aged boys who lived next door  shot and killed her. (The same fellow went on to rape women and to serve a term in prison and in a rehab program for molesters).

My only hope upon learning of Tammy’s demise is that her killing was fast and that she never knew what hit her, which would have been more merciful and far less stressful than the situation that brought her to me in the first place.

It’s awful to end of life story in this way, but it’s what happened. Tammy’s taming may have ended up causing her demise. I have no doubt she did not see the young man as a threat to her survival. She saw a two-legged friend, like the ones who had rescued her. She felt she had no reason to fear him.

Sadly, she was grievously mistaken… 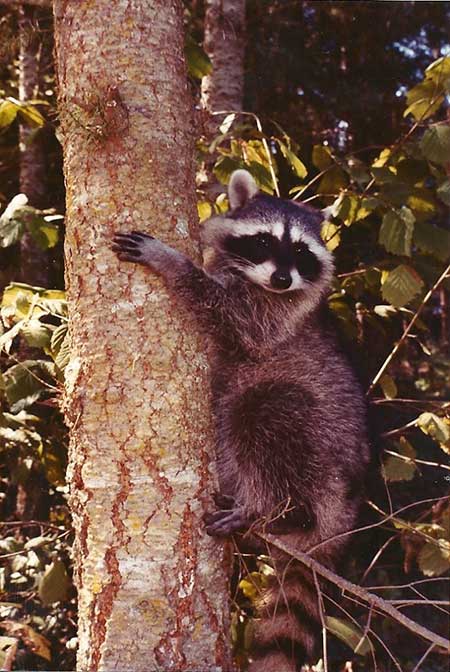 A raccoon kit came to me as an infant while I was living in Eatonville Washington. Our next door neighbor, a young man, brought him to me, knowing I was a local animal lover. At the time, I was raising Deaken, my “serval son”, and African wildcat born in captivity.

My neighbor had discovered the raccoon kit “abandoned”*** in the woods and had tried to care for him, but he wouldn’t eat and the boy was afraid he would soon starve to death.

It didn’t take long for me to name him Gabriel. The first afternoon he was with me, I placed him and the blanket he arrived in a tall, large, wrought iron bird cage designed for a macaw or other large parrot. I wanted him to be able to move around a little bit, explore, watch me as I moved about, and get used to me. He still wasn’t interested in eating or drinking and I could see he was wasting away. It wouldn’t take much longer for him to reach the point of no return, but I was hopeful that, given the right circumstances, he would finally figure out that I was a good egg and that I wasn’t going to hurt him.

That evening I slept on the couch very near his cage. At one point I hear him chirr…a little raccoon communication that sounded plaintive. I imitated the sound to the best of my ability. He stopped, turned to face me, and came over to the side of the cage where I was. He chirred again. I responded.

Suddenly, he reached out to me with his forepaws, beseeching me to come to him. I did so and chirred again. That’s all it took. I opened the cage door and he climbed into my arms. I continued to chirr and tell him he was a beautiful boy and everything was going to be all right now.

I quickly warmed some milk in the microwave, popped it into a doll bottle, and offered it to him. He rolled over onto his back in my arms, took the bottle into his forepaws—his feet looked like little hands—and he drank his fill.

From then on we were best buds.

He was a kick and a card.

He would bring flowers from Mom’s garden to the back door and leave them there, as if “blessing” us with them.

He’s cadge tools from Dad and me while we were working on the outside porch banisters and carry them under the porch so I had to fetch them if we wanted to use them again.

He’d lie on his back uplift a liter sized 7-UP bottle filled with water with his back legs while pouring the liquid down his throat using his forepaws.

My uncle, who was a trapper, wanted to “test” some of his raccoon attractant on Gabriel. I told him to take a hike: I wasn’t about to allow anyone (relative or not) to use Gabe to cruelly trap his wild brethren. (Leg hold traps were still used with regularity in the 1980’s.)

An aside: this same clueless uncle also said that he would like Deaken’s pelt when he died because it was so beautiful. I told him, “He’s going out with what he came in. No dice.”

He persisted: “I’ll pay you for it, several hundred dollars. You can keep it or donate it to an animal cause.” Still no dice.

(Deaken was cremated. His ashes are with me. I want mine mixed with his when I die. End of story and beginning of eternity!)

Gabriel came to me in May, 1979, the same month Deaken did, so they were raised together. Both tried to learn the other’s languages. Deke tried chirring and Gabriel tried mewing. Both succeeded, more or less, but with “accents” native to their own species.

As autumn rolled around, Gabriel bulked up and his fur grew shiny and luxurious. I knew it was time for him to start hearing the call of the wild and that he would soon disappear into the forest from which he’d come to find a mate and settle down. So it wasn’t a surprise the day he disappeared. He had been staying out longer and longer, and had taught himself how to forage for food, so I knew he could take care of himself.

What I didn’t know, until much later, is that one of the next door neighbors’ twin boys, who had been a thorn in our sides for as long as we’d owned the place, shot Gabriel and hung him on the fence between our two places to let us know. Years later, Mom confessed that she found him hanging there and had buried him. She didn’t want to break my heart…and she knew I’d have seriously risked life and limb had I confronted the kid killers next door. They were compassion-less, taunting, frighteningly scary dudes…

*** Raccoon cubs and fawns are rarely "abandoned" by their mothers. Please don't remove wild animals from their natural habitats.