Cougars invading cars and dogs in plays visited me in my dreams last night.

I've had  critters on the brain, day and night, recently. With the air quality here in the Pacific Northwest for the past two weeks at "hazardous" levels because of fires in BC Canada and elsewhere, we've been advised to stay indoors whenever possible. It looks and feels (when I breathe) worse than Los Angeles at its worst every day so far (before Earth Day and all of the environmental protections that were put into place to reduce carbon emissions back in the day).

So naturally my thoughts run to "humans can stay indoors, but farm animals and wild animals can't. What are these hazardous conditions doing to them?!"

Which is why, perhaps, I had a dream last night about Jackie having agreed to "babysit" a cougar for a friend by chaining it outside our house (a very bad idea!).  It was snowing and the cougar seemed relatively happy about that: it wasn't stressing or upset in any way, but I thought it should be in an enclosure instead of on a chain.  I was tolerating the situation--barely.

The home we shared seemed to be a lot like the old stagecoach stop we first lived in in Cle Elum when we were teenagers. There was a lot of open land around it. But there was a six-lane freeway where a two lane rural road would have been in Cle Elum, which was very close to the house--no more than 50 feet away, tops.  Jackie's cougar was staked out next to the house.

I was in a car with a friend. We were heading out to go somewhere. I started onto the freeway, turning left, and the car got bogged down in a snowdrift, so I decided we'd better stay home and not venture out.

But the car was bogged down in the middle of the freeway, in a dangerous spot because there was a rise in the freeway out the passenger-side door and it also curved around a hill at that point, so oncoming traffic wouldn't see us until it was too late--if any was coming.

I managed to get the car spun around so it was facing the house, but it still wouldn't move forward. So I stuck my foot out the side of the car, hoping to "help" it move.

At that moment, two large cougars, about two years old, came bounding across the freeway over the hill, heading for the chained cougar to play with it, it looked like to me. They seemed happy and out for a good time.

Well, my faux-rabbit-footed boot (with my foot in it) was on the ground beside the car, and they spotted it immediately because it was moving and the car was not. So they raced over.

I thought they were going to tear my foot off, but I didn't want to open the door enough to pull it in, because that would allow them access to the rest of my body. So I was torn--lose a leg or lose my life!

Instinctively, I tried to get my foot in (not wanting to lose it). One of the cougars pried my car door open and leaped inside, followed immediately by the other one. My friend was in the back seat of the car.

Instead of chewing on us, each of the cougars flopped down atop us and started purring and head-rubbing, seeming to be asking for chin tickles and petting. So I did that. My cougar loved it.  So I instructed my friend not to panic and to just love on the cougar.

I figured these were playmates to the cougar that Jackie was babysitting and that somehow they had gotten out of their enclosures (or away from their babysitter) and come over to hang with Jackie's cougar.

I guess this dream was my brain's way of "rescuing" wildlife, since I can't do that in reality. Perhaps the snow in my dream represented purifying the air so the critters would be happy again--and the rest of the dream was showing me they were.

It was a really cool dream!

The other dream was that I was at a play where I was pulled into the action by the actors. One of them was Jane Lynch ("Sue Sylvester" in GLEE, among other noteworthy performances). In the play, her character "arrested" me and tied me, with my arms behind my back, to a railing with some kind of rope, but before long she untied me and placed a medium-size, semi-fluffy/relatively recently shaved dog into my arms and whispered, "Hold her." 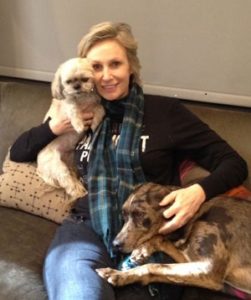 Jane Lynch with two of her dogs

As the play proceeded, it became apparent that there were going to be several dogs placed in audience members' arms to hold, because the idea was to get them to fall in love with their "acting dogs" (really homeless or relinquished pets) and want to take them home. (Ingenious!)

So I dutifully fell in love with my little ward. I really did; I wasn't acting. She was very sweet.

At the end of the play, the actors said that all of the animals in it were up for adoption, with the adoption fees going to aid a dog rescue outfit that all the actors supported and endorsed.

I carried my dog to Jane Lynch and said, "I'll take her." She looked happy and wistful--both at once. She was listed for $100.

I asked, "Will you take a credit card?"

I didn't ask any more questions because I could tell she was upset about having to give her up (whatever the reason was: I didn't want to pry; I figured maybe she was sick and didn't want word to get out).

So I started out the door with her dog. Looking back at her, I could tell she was really torn up about it.

I returned to her and said, "You can visit her any time you want. Any time. Don't hesitate!"

She smiled, winked, and said, "I picked the right audience member, didn't I?"

And that's where that dream ended.

Most of my dreams end happily. I have very few bad dreams--and even those usually work out in the end okay.

My heart and brain take good care of me even when I'm asleep.

Update: I just went looking for photos of Jane Lynch with  pets (her own or other peoples) and look what I found! The very dog I dreamed about is sitting on her right in the above picture. (At least it looks the same as the one I dreamed about. Her name is Olivia and she was thirteen when  the photo above was taken.) She's a Llaha Apso like Fancy, the dog DeForest and Carolyn Kelley had for years...